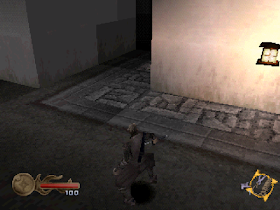 Genre: Action
Perspective: 3rd-person
Gameplay: Fighting, Stealth
Setting: Fantasy, Japan (Ancient/Classical/Medieval)
Published by: Activision
Developed by: Acquire Corp.
Released: 1998
Platform: PlayStation (PSX, PS1)
This game is very similar to the Japanese version, which was distinguished by a lot of advantages and terrible Japanese color, which can lead any player into despair. At the same time, several very serious differences should be noted. The action develops in quiet, modest feudal Japan of the Middle Ages, you will need to travel alone in the countryside and various villages, in search of a character who deserves to meet you - a professional killer. The “client” you ordered is not a fool and therefore takes certain precautions to minimize the chance of his premature death. Guards of varying degrees of danger and intellect — guard dogs or wild wolves — will be waiting for you in each of the places you find yourself, sometimes they will be ordinary villagers - ready to lift you up in the forks at the slightest sign of danger. You will appear in the guise of a big dark warrior Rikimaru, or as a small but vicious Ayame, and in any case, you should usually try to get to the person you ordered without any noise - the main goal of each level is to finish off his boss, and not all The population of the area in which you operate. Silent, but deadly, this is the motto of any hero of this game. A special hook that can hook on almost anything will do you a good job when you need to climb onto the roofs. From there it will be more convenient to act - you can take advantage of the surprise, travel as high as possible, invisible to enemies. If you are still seen by opponents, they will immediately attack you, they will throw spears at you and shoot bows, and they will bring down the rest of their long-range weapons at you, this is a very good reason to go unnoticed. You will need to throw your throwing knives directly from the roof, pour a handful of very tasty, but poisoned rice into someone’s bowl, you can throw your improvised grenade or appear behind the unsuspecting guy and cut his throat with one wave of your sharply sharpened blade . You will need to learn how to feel and behave like a professional killer, as a result, the game becomes so bloody.

Have you ever dreamed of mastering the ability of a ninja to penetrate locked doors and use weapons more skillfully than anyone else in this world? Now your dream has come true, the game from Activision will allow you to fully enjoy these ingenious secret weapons, and in addition you can also read about how to complete all the missions of this complex game.

When you choose a character in the Tenchu ​​game, you immediately need to understand that this is a very important decision that will greatly affect how you play, both heroes have their own strengths and weaknesses, which are very different from each other, you will need to use them fully in order to succeed. In addition, we highly recommend that you practice your practice of striking both characters in training mode before you reach real combat levels where enemies will kill you.
Rikimaru: His name means "Power Wheel", and therefore this guy turns out to be a very reliable warrior and in battle he has no equal. His weapon inflicts significantly more terrible wounds than the one that Ayame fights, so if you find yourself in the heat of battle, you will surely like the fact that your hero is Rikimaru. At the same time, it turns out that in some situations even his incomparable talents of a fighter do not help, so you have to think about it - sometimes it’s worth not getting into a fight at all. Since Rikimaru is very powerful and somewhat slow from this, he does not always manage to quickly retreat, even when he realizes that the matter is bad.
Ayame: Her name means "Multicolor Girl", although this is not visible on the screen. What can be called color in this heroine is her movements and speed. She turns out to be a much more agile fighter, and therefore has a much greater chance of surviving in battle than any other warrior.Pay close attention to this fragile girl who pierces opponents one by one and manages to leave the scene of the crime before anyone can notice her. She is very jumping, so when chasing on the roofs, she has an advantage over Rikimaru. Her weapon is much weaker than what Rikimaru is fighting, but she uses it much more efficiently, she can sneak up on enemies more secretly, She will be a more suitable character for you.

Path of the sword

Although the best tactic for you is not to show your opponent at all, sometimes you will have to fight. When such a significant event takes place, it is not superfluous to advise you something. You should always study your opponent before attacking him. It is too easy to jump on the enemy at the moment when he turns around and stabs you in the stomach with his sword - perhaps then you will regret not seeing how the enemy moves. Some opponents move along a certain route, others stand still and turn from time to time, some behave even less predictably. Of course, it is precisely for this that you need an eye and an eye so that you yourself can’t stay without a head. Always try to attack the enemy from behind. There are three main types of movements that you can perform, it is something like small video clips. Another method is to hit the enemy before you get close to him, then you will be able to quickly get out of the strike and retreat without performing the standard combination of movements, although this does not look as cool as your actions in close combat. There is much less blood, but there is an opportunity to wash off. The fastest way to start an attack is to slide down the enemy from the roof. If you just jump down, then your character will have to spend some time getting on his feet, very often during this time the enemy manages to react and rush at you with a naked blade, which promises you a quick death, so try to ride more and less jump. You should also remember about such a useful thing as blocks. When the enemy swings at you with his huge sword, sometimes it is better to use a cautious approach, although sometimes it’s much more effective to enter and strike and cut the enemy just when he is going to cut you in half. In addition, there are a very large number of attacking movements that you can use, some of them more powerful than others. I advise you to familiarize yourself with all the tricks and find out which of them are better suited to carry out attacks. If you press the attack button several times in a row, then you will be able to perform a series of several movements at once, the third movement in such a combination is always the most powerful. Another very powerful move is a jump shot. There are two types of such a strike, one after a normal jump, and the second after you jump forward with a spin. When you perform a similar blow, try to calculate it properly. A movement that is worth noting especially is a somersault. It will allow you to jump forward and then turn in the air. Calculating your movement is not such an easy task, but when you learn this technique, it turns out that you did not try in vain. You will need to press the following buttons - very quickly and sequentially: Down, Up, X.

The Way of Inaudible Steps

The ability to silently move and penetrate completely inaccessible places is your main occupation and goal. If you go unnoticed, then you get more points for completing the mission, while you have to fight much less. Ideally, the best way to move around the territory occupied by the enemy is to use the special “Crouched” movement, it is great for slowly and accurately choosing your position, approaching the enemy, and then cut his throat with one exact movement. If you use the Creeping motion near the wall, you can stand in such a way that the wall will cover your back. You can then go to the corner in order to look back and find out if anyone is patrolling the area. When you want to move forward, the best idea is to roll away from the wall, for this you will need to press the button right or left twice. In this way, you will stand in the direction you were looking when you were behind the wall. This is a much more convenient way than maneuvering behind a wall, which is unlikely to make you very happy, since that method is extremely awkward.

Shinobi means "Patience." You will need it if you want to win a game whose heroes are silent killers. When you see your enemy, you should always spend some time looking around carefully, choosing the direction of the attack, and deciding where you should deal the decisive blow. It is also necessary to find out if there are several more enemies nearby who will rush at you as soon as you appear from your shelter. If you have no choice and have to attack in the presence of another enemy, see that at the moment of impact the enemies stand with their backs to each other, while you will need to plan your retreat very carefully, it will be a rather important element of every mission that you will pass, always first assess the situation, and only then begin to act, if you change the sequence of actions, then do not blow your mind. Thinking in general is very useful, because for almost any situation there is the best attack strategy that will allow you to cleanly do your job, and then quietly retreat without getting involved in a fight - that's how professionals work. At each level, there are three main options for the game, they differ in the location of opponents and objects that you need to collect along the way. Thus, it is difficult to think of a route along which you need to move each time, so you have to use your own estimate and trick in order to choose the safest route and the ability to kill enemies.
‹
›
Home
View web version