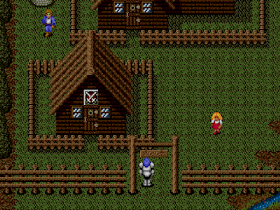 Genre: Action, Role-Playing (RPG)
Perspective: 1st-person, Bird's-eye view, Side view
Visual: 2D scrolling, Fixed / flip-screen
Setting: Fantasy
Published by: SEGA of America
Developed by: SEGA-AM2 Co.
Released: 1990
Platform: SEGA Genesis / Mega Drive
This is another RPG representative for the Sega MegaDrive / Genesis. The intro tells us what happened many years ago. King Tsarkon, the ruler of Cartahena, has attacked the peaceful lands of the kingdom of Excalabria. The people of Excalabria fought not sparing themselves, but was still kneeling. When the castle was besieged and King Erik V understood that death was inevitable, he called on his faithful servant, whose name was Blade. The king asked him to save the little prince and pick up the Ring of Wisdom - an ancient relic of the family. The blade, along with the baby and the ring, escaped from the castle before its complete destruction. He settled with a little prince in a distant village and raised him as his own son. Tsarkon, in turn, vowed, whatever it was worth it, to find and kill the prince.
We get to know the character eighteen years after the events described above. The hero needs to visit the dying father. Who will tell the hero that he is a prince and the Blade is not his father. You can say on this revenge it all begins.
The whole game can be divided into three game modes: City, Travel, Fight. The game has a save, but you can only save in churches located in cities. In principle, this is a standard RPG, but the movements between cities and battles are a little out of place for games of this genre.
‹
›
Home
View web version