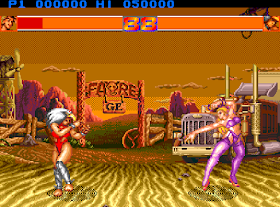 Genre: Action
Perspective: Side view
Gameplay: Arcade, Fighting
Narrative: Adult
Published by: Games Express
Developed by: Games Express
Released: 1993
Platform: TurboGrafx / PC Engine
Strip Fighter II is similar to Street Fighter II, but has a distinguishing feature: in this fighting game all the participants are attractive women. Players can choose one of six female characters. The player-controlled character must use her fighting and combat strengths to defeat the other five girls and a palette-swap of herself.
The game has some fairly explicit content: during some moves the fighters would take their clothes off; after each fight the player is presented with a picture of female stripper.
‹
›
Home
View web version