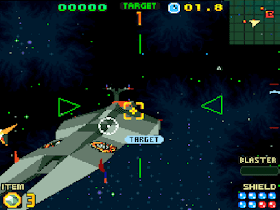 Genre: Action
Perspective: 1st-person, Behind view
Gameplay: Arcade, Rail shooter, RPG elements
Setting: Sci-fi / futuristic
Interface: Direct control
Vehicular: Space flight
Published by: Nintendo of America Inc.
Developed by: Argonaut Software Ltd.
Released: 1993
Platform: Super Nintendo (SNES)
An unreleased game from Nintendo itself that shows the powerful features of Super Nintendo. Thanks to the romhackers, the game is finalized and completely passable. Many of the ideas from Star Fox 2 were implemented in subsequent games in the series. I think few will argue that the Nintendo gaming period on SNES was the best. The company made a masterpiece after a masterpiece. There are no questions about the quality of this game either, everything was done with the highest score. It's a shame that the game has not received an official release.

In Star Fox 2, the battle continues against the Emperor Andross, who wants to conquer the Lylat system, and the Star Fox team has gathered again to defeat him. The game introduced a new game system, new types of ships and two new members of the Star Fox team. It also has a more advanced 3D engine thanks to the new and improved version of the Super FX chip, GSU-2.

The gameplay of Star Fox 2 is noticeably different from its predecessor. Instead of following a predetermined linear path inside predefined missions, the player controls a team of two ships on the Laylet system map. When the player’s ships come in contact with the enemy’s forces, the game proceeds to control the Arwing fighter directly, and the gameplay becomes similar to the gameplay of the first Star Fox game. When the player performs the tasks, he is returned to the map screen, where he must choose a new destination.
The goal of the game is to destroy all enemy forces on the map, while protecting the planet Corneria (located in the lower left corner of the map), without allowing its damage level due to enemy attacks to reach 100%. In order to defend Corneria, the player must intercept fighters and incoming IPBMs (interplanetary ballistic missiles), and also deal with the sources of these attacks: battleships that deploy additional fighter squadrons and planetary bases that launch IPBMs. To help the player, General Pepper uses a satellite that can shoot down opponents, and the player also needs to defend this installation from saboteurs who can capture the satellite and use its cannons to fire at Corneria. The player also encounters the Star Wolf mercenary team, which prevents it and various bosses throughout the game.
Star Fox 2 uses a semi-real-time gaming system. When choosing a destination on the map, the game pauses, but while the player’s ships travel to their destination, enemies and missiles also move towards their destination. When in the action mode there is a struggle with enemies, time goes at a slower pace, nevertheless allowing other enemies and missiles to advance and cause damage. To prevent excessive damage to Corneria, the player may need to exit the battle to intercept another enemy.
In addition to the main game, Star Fox 2 includes a "duel" mode for two players on a split screen.
‹
›
Home
View web version