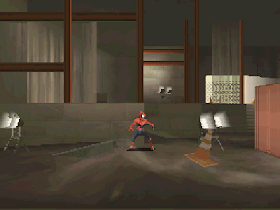 Genre: Action
Perspective: Side view
Visual: 2D scrolling
Gameplay: Metroidvania, Platform, Stealth
Published by: Activision Publishing
Developed by: Griptonite
Released: 2010
Platform: Nintendo DS (NDS)
Spider-Man has a problem. Not only has he a collection of villains on his case willing to take him down, but they've all gotten their hands on a piece of a very powerful, very mysterious tablet that's been shattered and spread out across multiple dimensions, in order to keep it out of Mysterio's deadly hands. To defeat them, Spidey and three alternate versions of Spidey (Ultimate, Noir and 2099) must use all their skills, powers and quick one liners to defeat each villain and restore the tablet, in turn stopping Mysterio for good.
In this Nintendo DS edition of the console big brother, Spider-Man progresses through a side-scrolling platform adventure through the four differing dimensions, web swinging and fighting his way through hordes of goons. Attacks differ in power and speed, as well as being both ground or ariel types. Bonus spider icons can be collected and spent on improving each version of the characters' skills set, be it a new attack or an improvement on a previous one, as well as increasing health levels and the length of charge attacks. Each level features a different boss, that can be defeated by discovering a weakness or timing the attack just right in order to take him down and recover a piece of the tablet.
‹
›
Home
View web version