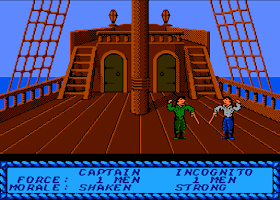 Genre: Action, Strategy / tactics
Perspective: Top-down
Pacing: Real-time
Gameplay: Vehicular combat simulator
Vehicular: Naval / watercraft
Setting: Sea pirates / Caribbean
Published by: Ultra Software Corporation
Developed by: MicroProse Software
Released: 1991
Platform: Nintendo (NES)
Pirates! Designed for single player acting in an open world. The game begins with a privateer certificate confirming entry into the service of the Spanish Empire, the Dutch Republic, the Kingdom of England or the French colonial empire. During the game, the player can move from one side to the other, is allowed to remain in the service of several countries at the same time, and piracy can be done at any time. The choice of game actions is free: the player can attack enemy ships or cities, hunt pirates, search for treasures, save missing relatives or even avoid any form of violence, trying to increase his wealth through trade. The game also does not have a predetermined ending, although over time it becomes more difficult to hire crew members. As the character ages, it becomes harder for him to fight, and poor health eventually forces him to retire. The game ends here, after which it is determined how the former captain will spend the rest of his life: the poor - at worst, the king's adviser - at best. The result is based on the amount of accumulated wealth, land tenure, rank, marital status and other merits.
In addition to the parties at the beginning of the game, it is proposed to choose an era. Different tasks are characterized by different eras, since political and economic power is distributed differently between the European empires operating in the Caribbean. The earliest starting year is 1560, when the influence of Europeans in the region is small, and only Spain is the real force. At the beginning in 1680 (the latest start), the player will discover many developed Spanish colonies and an overall high degree of activity. Intermediate options: 1600, 1620, 1640 and 1660 - correspond to a gradually decreasing Spanish influence and an increase in the intensity of shipping. A set of ships depends on the choice of an era: some types appear more often in some periods and less in others, some of the ships are used almost exclusively by certain countries.
A successful game required a wide range of skills: hand-eye coordination during saber battles, tactical abilities when fighting on land and at sea, strategic thinking for making many decisions, starting from getting married and ending with sharing the loot. Each new game could develop in an unexpected way, since most of the events in it were random in nature, including the state of the economic and political system. At the beginning of the game, this could significantly affect the available choice of strategy. Also, the game required an understanding of the principles of sailing, so that, for example, by tacking on a heavy frigate to catch up with a quick pin, and certainly luck so that the wind blew in the right direction.
One of the most innovative features of Pirates! it was the introduction of a dynamic game world: many of the most important factors affecting a player’s decisions were randomly selected at the beginning of the game and then changed as it progressed. This not only created a unique passage every time, but also required the player to be flexible and to be ready to use the opportunities that open up. The changes were not related to the actions of the player, but depended only on time.
The most important random factor in the game is diplomatic relations between the four countries claiming dominance in the region. Relationships can vary greatly from game to game and instantly go from extreme to extreme, creating new and removing old behaviors, often for a long time. A player, as a rule, benefits during wars between two or more countries, because any attack on ships or cities of one power, which happens quite often, unless battles are specifically avoided, causes appreciation from its enemies, generously giving the player lands, titles and other benefits. In peacetime, a player gains credibility only by dealing with pirates on the high seas, which is seen as a favorable action by all nations. However, meetings with pirates are rare.
Cities also change over time: their population and wealth levels fluctuate, and you can see the current statistics of any city through the menu. Based on this information, you can plan future operations: trade or combat.
Original Pirates! had double protection: the drive against copying and using the information specified only in the paper manual. The player had to answer at what time ships with various treasures arrive at the port, and in the event of an incorrect answer, the complexity of the game process noticeably increased. For most, this became an insurmountable obstacle to continue the game.
‹
›
Home
View web version