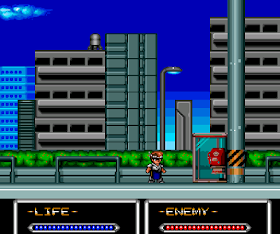 Genre: Action
Perspective: Side view
Visual: 2D scrolling
Art: Anime / manga
Gameplay: Arcade, Platform
Setting: Sci-fi / futuristic
Published by: NCS Corporation
Developed by: Winds Co.
Released: 1992
Platform: TurboGrafx / PC Engine
Arnold and Sonya are the only people who have been given cybernetic bodies in order to deal with the evil army of invading monsters. They figured it out in the first part, and the doctor called them to return to them the original human bodies. But suddenly the dock disappeared and another evil force invaded Earth. In short, again Arnold and Sonya must prove that they are the best! What are they Shockman’s. Yes, and do not forget about the doctor.
The graphics are amazing, so play!
‹
›
Home
View web version