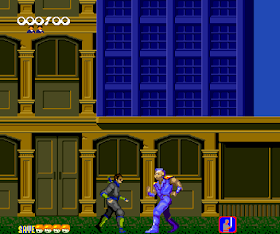 Genre: Action
Perspective: Side view
Visual: 2D scrolling
Gameplay: Arcade, Platform
Interface: Direct control
Setting: Fantasy
Published by: Asmik Corporation
Developed by: Team Shinobi
Released: 1989
Platform: TurboGrafx-16 (TG-16)
You are a cunning ninja and your name is Master Joe Musashi. You have excellent command of shurikens, swords, nunchucks and other weapons. In fact, no one will stop you.
In addition, you also work for the government, which once again threatens something. This time, you are opposed by a certain organization called Ring of Five - five seasoned ninja terrorists. They captured the children of world famous leaders and sheltered them in various places.
The game has only five missions, five bosses.
‹
›
Home
View web version