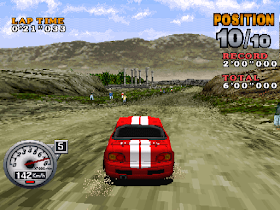 Genre: Racing / driving
Perspective: 1st-person, Behind view
Gameplay: Arcade
Interface: Direct control
Vehicular: Automobile, Off-roading, Track racing
Setting: Europe
Published by: Prism Arts
Developed by: Prism Arts
Released: 2000
Platform: PlayStation (PSX, PS1)
Rally de Europe is an arcade rally racing game and sequel to Prism Arts' previous game Rally de Africa. The game features four game modes: Championship, where the player plays through a series of races; Spot Entry, where the player can play a singe race; 2 Player Battle, where two players can race against each other; and Memory Battle, where the player can race against the replay of another player which is stored on the memory card. In each race you begin in the tenth position behind nine computer opponents, the goal is to pass all the opponents to get into the first place position before you reach the end of the stage. The game features a total of five different stages set across the continent of Europe and a selection of unlicensed vehicles to race with.
‹
›
Home
View web version