Noddy and the Birthday Party (GBC) 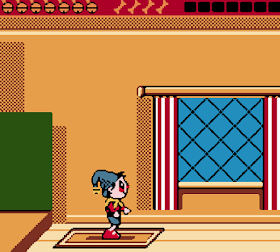 Genre: Action
Perspective: Side view
Visual: 2D scrolling
Gameplay: Platform
Published by: BBC Multimedia
Developed by: Tiertex Design Studios
Released: 2000
Platform: Game Boy Color (GBC)
In the game's plot, Big-Ears has an upcoming birthday party. Levels are selected on an overworld map, where Noddy drives his car to any of various locations in Toyland, the setting of the Noddy universe. In each level, the player must help Noddy find all of a series of seven items (which change throughout each level), which will be useful for the setup of the party. After each level is completed, the player gains sixpences, which add up to an amount of 36 by the end of the game, to contribute to funds for the birthday cake. There are a total of ten levels, eight of which are platformer levels, and two of which are autoscrolling minigames.
‹
›
Home
View web version