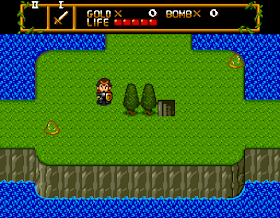 Genre: Action
Perspective: Top-down
Setting: Fantasy
Published by: NEC Technologies
Developed by: Hudson Soft Company
Released: 1990
Platform: TurboGrafx / PC Engine
Neutopia is widely regarded as a clone of the popular Nintendo game Legend of Zelda in almost every aspect. Many observers have rated the game for creating noticeable improvements over Zelda, but various flaws - which include long passwords, repeated gameplay, and poor collision detection - prevent the game from being superior to the 1986 Nintendo title. But overall, observers have named Neutopia one of the best video games of its type and one of the best names in the TurboGrafx-16 library. There will eventually be a sequel to the game of Neutopia II, in which Jazeta disappears and his son sets to find him.

Neutopia occurs in the distant past in the land of Neutopia - a prosperous and peaceful land in which people worshiped in the shrine and were protected from Aurora. The earth was divided into four adjacent areas called spheres: earth, subterrain, sea and sky. People lived in abundance and happiness with the help of eight spiritual medallions, which were controlled by the Princess and were used for good; And the "climax castle" was built as a symbol of their prosperity. Each of the medallions represented the authority of the ancestor, whom Nemesis Neutopia, in the evil demon Dirth, petrified, but whose spirit remains.
Then, one night, Dirth appears and invades the earth. He sends his army of demons to ravage the earth, and he captures the princess Aurora and holds her captive in the highest castle, where he will dominate the invading demons. He also steals eight medallions, which he now controls for evil purposes; he scatters eight medallions in four spheres and places them in crypts. A young warrior named Jazeta arrives at the Sacred Shine, where he is given an "enchanted compass", "has the power of medallions" and can direct him to them. He also said that he inherits the wisdom of his ancestors and in case of victory win the love of the princess. Jazeta then ventures out to defeat Dirth and save Princess Aurora so that she can release the Dirth spell over the spirits of ancient ancestors and use medallions to restore the world of Neutopia.

Neutopia is an adventure game whose action is a top-down perspective and labyrinth exploration similar to the Legend of Zelda. The player controls Jazeta as he sets out to save Princess Aurora from Dirth. The game has four levels, called spheres, which Jazeta must study and restore two medallions from each. Medallions are hidden in crypts, where each medallion is guarded by a boss. Having collected all eight of them, Jazeta gains access to the North Pole, where Dirth resides. The player controls Jazeta by moving in any direction with the control panel. Jazeta can also attack with weapons or objects of use, scroll through messages, or access the “status screen” with the controller. Jazeta is a meter in life, he is currently holding weapons, and the amount of gold and the remaining bombs are displayed during the game on the top of the screen. On the status screen, players can select the item to use, see in which direction they should go, as indicated by the enchanted compass (which also beeps when Jazeta is near a crypt or medallion), and also view a map of the crypt of Jazeta located, provided that they gathered a crystal ball inside.
Throughout the game, players can collect information from other non-player characters, many of which are located in caves all over the ground, in which some of them can only be discovered by burning objects with fire, exploding walls with bombs, or by clicking certain rocks, While the main weapon of Jazeta is the sword, it can also use other items scattered throughout the game. The "Fire Rod" unleashes fireballs whose strength and range depend on Jazeta's level of health; Other elements include Moonbeam Moss, which can illuminate dark rooms; A “drop of rainbow” that allows Jazeta to cross small gaps; "Falcon shoes" that give him extra speed; medicine that fills his life meter; magic rings that can turn tough enemies into weaker ones; sandbags that temporarily stop enemies; and wings that can warp him back to the place where he last received the password. Jazeta also receive sword, shield and armor upgrades throughout the game, which can increase attack power, increase defense against shells, and reduce enemy damage, respectively; each type of sword, shield and armor ranges from bronze to silver "strong". Enemies in the game include goblin throwing spears, a fire ball throwing fish, fake stones, a ghost and charging knights.
Jazeta has a life counter that increments by one each time a player collects a medallion or finds a monk throughout spheres; decreases whenever he gets hit, and the game ends when it ends. However, provided that the players have collected the “Book of Rebirth”, they can continue and restart the game, where they last received the password, even after the console was disconnected; Passwords will also allow players to resume the game at a later time.
‹
›
Home
View web version