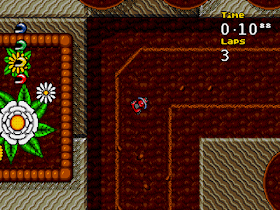 Genre: Action, Racing / driving
Perspective: Top-down
Gameplay: Arcade
Published by: Codemasters Software Company Limited
Developed by: Codemasters Software Company Limited
Released: 1994
Platforms: SEGA Genesis / Mega Drive, Super Nintendo (SNES)
This is the second part of the Micro Machines game. Although the game was not bad before, now it has become even better. More different vehicles, more different tracks and obstacles. The main thing is that the gameplay remains the same. It is addictive and just makes you relax and have fun. It is especially good to play this game in a large company. There were two versions of the cartridge, one with additional ports for two J-Cart gamepad. It was also possible to play together on the same gamepad.
‹
›
Home
View web version