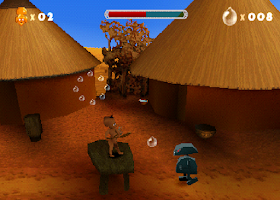 Genre: Action
Perspective: 3rd-person, Side view
Gameplay: Platform
Published by: Wanadoo Edition
Developed by: Étranges Libellules S.A.
Released: 2001
Platform: PlayStation (PSX, PS1)
Kirikou: The Game is a platform game based on the French animated film by Michel Oselo: Kirikou et la Sorcière (Kirikou and the Witch) filmed, in turn, based on West African folk tales. The cartoon tells how a newborn boy Kiriku saves his village from an evil witch named Karaba. Kiriku's mother told him a story about an evil sorceress who dried their spring and ate all the men in the village, except for her younger brother who goes to battle with the witch. The brave kid decides to accompany the last warrior along the road of fire trees to a decisive battle with the sorceress. Kiriku is an unusual boy. From birth, he can speak, possesses deep wisdom, can run at the same lightning speed and outwit the servants of the evil sorceress, although he himself has a fingernail. The game is made according to the technology of combining 3D and 2D angles and using technical solutions that we saw in Kloanoa: Door To Phantomile or the Pandemonium series of games !, and the masters from Étranges Libellules once again proved that they can make good games (just remember the wonderful Pink Panther: Pinkadelic Pursuit).
‹
›
Home
View web version