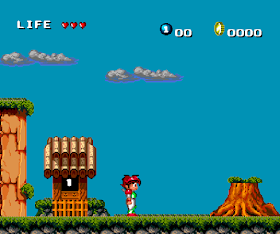 Genre: Action
Perspective: Side view
Art: Anime / manga
Gameplay: Platform
Vehicular: Mecha / giant robot
Setting: Sci-fi / futuristic
Published by: NEC Home Electronics (U.S.A.) Inc.
Developed by: Hudson Soft Company
Released: 1989
Platform: TurboGrafx / PC Engine
A very interesting game, I do not advise you to pass by.
Once a strange meteor fell directly to Earth and the whole world was captured by alien creatures. Your name is Keith Courage and you, as a member of N.I.C.E. (Nations of International Citizens for Earth), are simply obliged to defeat enemies and return peace to Earth.
It seems to be a platform, but interspersed with role. Those. you can talk with residents, get all kinds of weapons, things, etc. from them. At the first stage, you are still an ordinary person, but at the next stage you turn into an iron killer. Cool game graphics.
‹
›
Home
View web version