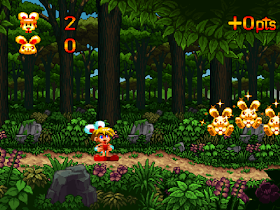 Genre: Action
Perspective: Side view
Art: Anime / manga
Gameplay: Platform
Setting: Fighting
Published by: Victor Entertainment Inc.
Developed by: Victor Entertainment Inc.
Released: 1996
Platform: SEGA Saturn
A fascinating game filled with humor and positive about a ninja girl named Rami dressed in a rabbit costume. Rami travels around Japan, both on foot and on the back of his hand dragon, at this moment the game turns into a scroll shooter. The gameplay is a mixture of genres such as platformer, scrolling shooter riding a dragon, swimming under water, roller coaster ride, escape from a crowd of furious bears. The plot is straightforward, during dinner, the main character's house is attacked and stole a family heirloom called Orb, which is the key to the treasures hidden under Mount Fuji, and the house is smashed. The head of the ninja clan sends our heroine to return the heirloom and punish the offenders. Here our adventures begin, along the way we have to defeat many enemies and collect the Orbs, excellent graphics, a sea of ​​humor, colorful bosses and an unexpected ending - this is the recipe for a good game.
‹
›
Home
View web version