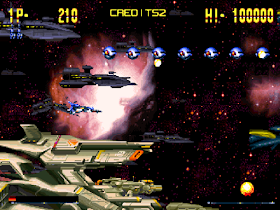 Genre: Action
Perspective: Side view
Visual: 2D scrolling
Gameplay: Arcade, Shooter
Setting: Sci-fi / futuristic
Published by: Technosoft Co.
Developed by: Technosoft Co.
Released: 1996
Platform: SEGA Saturn
From the same company that made the classic Thunder Force series, Hyper Duel easily lives up to its pedigree (frenetic action and impressive set pieces) whilst offering a very different and original experience. Apart from going for a more mech-based Macross feel (you can transform between robot and ship), the game also deviates from the TF series by allowing you to collect extra supporting ships which independently fly around the screen helping you, their mortal nature tends to push you towards protecting them, providing covering fire so as to allow you to accumulate a small gang as you progress. Hyper Duel is also a phenomenal arcade port, every aspect of the game was actually improved during its transition to Saturn, graphics, music, and gameplay.
‹
›
Home
View web version