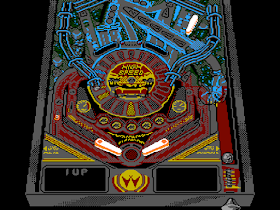 Genre: Simulation
Perspective: Top-down
Gameplay: Pinball
Published by: Tradewest
Developed by: Rare Limited
Released: 1991
Platform: Nintendo (NES)
High Speed is a conversion of the Williams Electronics pinball game of the same name. The game recreates the pinball table and gameplay from the arcade version and also adds some video game features, such as lightning bombs, attacking enemies, magnetic helicopters, and rust balls which dissolve your flipper. The bottom part of the screen remains on the bottom set of flippers, while the top half scrolls over the whole pinball table to follow the action. Gameplay is for one to four players alternating.
‹
›
Home
View web version