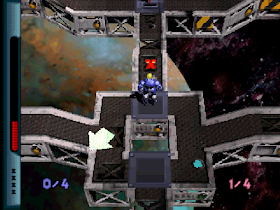 Genre: Action, Strategy / tactics
Perspective: 3rd-person
Setting: Sci-fi / futuristic
Published by: Virgin Interactive Entertainment
Developed by: Radical Entertainment Inc.
Released: 1996
Platform: PlayStation (PSX, PS1)
Sometimes a good game is born out of an old idea. This is exactly what happened with the Grid Runner. This is a very interesting game, with a lot of attractive technical finds, however, in essence, this is a futuristic variation on the theme of the good old game Capture The Flag. The time of action, as far as one can judge, is a distant future. “Gladiators” fight with each other on several platforms, trying to collect flags scattered throughout the game space. But you can collect flags only if you have not become the bearer of the stigma "It". It resembles a game of napkins; Find another player, touch him and run away, that there is urine, if you do not want the stigma returned to you.
It is necessary not only to avoid "touch", but also to circumvent various obstacles and to avoid encounters with bad guys. Gathering additional sources of energy, you can set mines to trap enemies, teleport away from them, develop frantic speeds, build temporary bridges over abysses, etc. The choice of strategy plays a paramount role here. For the most gambling players, a Tournament version of the game is provided, as well as a duel mode for 2 players.
‹
›
Home
View web version