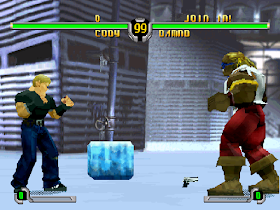 Genre: Action
Perspective: Side view
Visual: 2D scrolling
Gameplay: Arcade, Fighting
Narrative: Martial arts
Published by: Capcom Co.
Developed by: Capcom Digital Studios
Released: 2000
Platform: SEGA Saturn
This game was the last officially released game from Capcom for the Sega Saturn game console. It should be noted that the version for Sega Saturn was available only in Japan, but the game used the English language if it was set in the console settings.

Final Fight Revenge uses an eight-axis gamepad and five buttons to control it: four buttons for attack and a fifth “special” button. The fifth button is used to move the player to the front or back of the screen by simultaneously pressing it together with the up or down buttons.
The “special” button is also used to pick up weapons or objects that restore health from the ground. When a player approaches a weapon or an object lying on the ground, a green arrow appears on the screen, warning the player about it. There are two types of weapons in the game: melee weapons, such as knives and lead pipes, and firearms, such as flamethrowers and machine guns. The player can pick up and save up to three types of weapons in his inventory and freely switch between them. Also, the player can throw the weapon with which he is currently equipped at his opponent.

Final Fight Revenge has ten characters available for player selection. All of these characters are taken from the original Final Fight game. Cody, Guy and Haggar were characters available for selection by the player in the original game, while Gado, Poison, Andore, Damnd, Sodom, Edi E. and Rolento were used in the original game as opponents. Guy, Sodom, Rolento and Cody were previously used by Capcom in the Street Fighter Alpha game and some of them use the same tricks as in the Street Fighter Alpha game.
The single-player game mode contains six opponents controlled by a computer. The final battle with the zombies named Belger, the final boss from the game Final Fight.
‹
›
Home
View web version