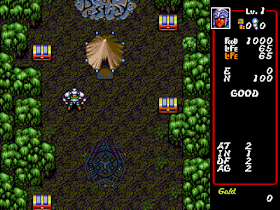 Genre: Role-Playing (RPG)
Perspective: Bird's-eye view
Visual: 2D scrolling
Gameplay: Action RPG
Setting: Fantasy
Published by: SEGA of America
Developed by: Hudson Soft Company, Westone Co.
Released: 1995
Platform: SEGA CD / Mega-CD
The Goddess of Ambition was locked in the mazes beneath the Dark Tower. Legend has it that whoever saves her, the goddess will fulfill any desire. Here is a group of heroes and decided to try their luck, free the goddess, and then return home alive.
Dungeon Explorer is a clone of the Gauntlet. Like the classics, this is a hybrid of an arcade shooter and role-playing game. Up to four people can play, you can choose from six heroes (monk, knight, elf, mage, beast and ninja). The plot begins in a safe place - in the camp. As soon as you leave it, health begins to decline, so we closely monitor the state of the hero. Of course, in the mazes (and at other levels), you can find bonuses that increase health. Also, we collect gold, for which then we will buy the best weapons.
‹
›
Home
View web version