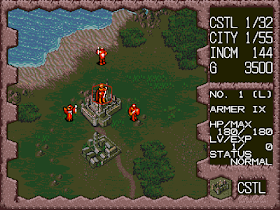 Genre: Role-Playing (RPG), Strategy / tactics
Perspective: Isometric
Art: Anime / manga
Pacing: Turn-based
Setting: Fantasy
Published by: SEGA of America
Developed by: H.I.C. Co.
Released: 1993
Platform: SEGA CD / Mega-CD
300 years ago, the high priest of the Cheshire Kingdom tried to upset the balance of good and evil by calling the evil god Orliman. But that time, the Kingdom of the Goddess of Light - Sabrina saved the Kingdom - she endowed the power of two knights who defeated the high priest and helped the King to bind Arliman in a gem. Veloniz guarded this stone for many years, but every year its hatred of the King grew. In the end, he turns into a Black Magician and orders the four generals to seize the Cheshire Kingdom, as well as release Orliman!
We control one of four heroes. Our task is to free the Kingdom from Veloniz. And fight with the army of the enemy will have a turn-based strategy. The main character (as well as his entire army) will be pumped (experience, money, etc.). You can also hire troops in the castle. Between battles it is necessary to distribute your army so that the enemy could not again seize the conquered territory.
‹
›
Home
View web version