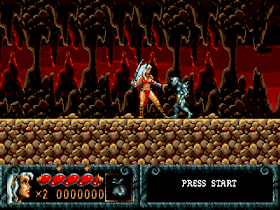 Genre: Action
Perspective: Side view
Visual: 2D scrolling
Gameplay: Platform, RPG elements
Setting: Fantasy
Published by: Electronic Arts
Developed by: Beam Software Pty.
Released: 1993
Platform: SEGA Genesis / Mega Drive
Three heroes - the Huntress, Warrior and Sorcerer - bring justice to this fairy-tale world. The barbarian is strong, the wizard has a long-range attack, and the girl jumps best of all. In addition to eliminating monsters, there is a search for keys and secrets. In the inventory, the characters store potions and items. After the first levels between stages, it will be possible to look into the store, where you can strengthen your character with new weapons and armor. For an enhanced attack, press up + hit, and for an increased jump, press hit + jump. A good game, though not easy.
‹
›
Home
View web version