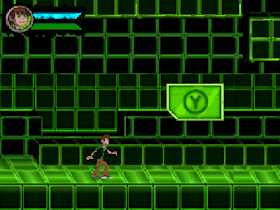 Genre: Action
Perspective: Side view
Published by: D3Publisher of America
Developed by: 1st Playable Productions
Released: 2012
Platform: Nintendo DS (NDS)
Ben 10: Omniverse is based on the events of the popular cartoon series of the same name Cartoon Network. A new story awaits you, covering just two time periods. You can take part in the adventures of young Ben Tennyson, as well as see his teenage years and even get acquainted with Ben's Rook - partner. The Rook is armed with a Swiss army knife from the future, which can turn into a variety of weapons. Thanks to this, the battles in Ben 10: Omniverse are more exciting than ever.
At your disposal will be 13 aliens, among which the newcomers Bloxx and Gravattack. Switch between them while traveling through a variety of game levels.
For the first time, you can play as a young Ben Tennyson, and as a teenage Ben. In addition, in Ben 10: Omniverse there is Rook, who will also be directly involved in the fight against villains seeking to destroy the world.
Rook is the all-new Ben 10 hero - a gifted but inexperienced fighter who helps Ben in his adventures. He is armed with the Proto-Tool - a high-tech, multi-functional weapon that, at the request of the owner, turns into a blaster, sword, staff or hook.
In your adventures you have to overcome many different levels.
In Ben 10: Omniverse, an exciting journey and an exciting story awaits you, following the events of the animated series of the same name. At your disposal will be 13 aliens, among whom there will be a place for beginners - Bloxx and Gravattack.
‹
›
Home
View web version