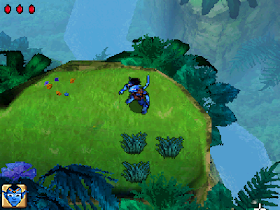 Genre: Action
Perspective: Bird's-eye view
Setting: Sci-fi / futuristic
Published by: Ubisoft
Developed by: Ubisoft Divertissements Inc.
Released: 2009
Platform: Nintendo DS (NDS)
Although James Cameron's Avatar: The Game is named after the movie, the story itself doesn't follow the plot of the film. Instead the player takes on the role of a young Na'vi warrior Nok. The game begins when the balance of nature that stood for thousands of years is threatened by the "sky people". Nok's home is attacked by the men of Dr. Ossman, a genius scientist working for the RDA Corporation and Nok is chosen for a sacred quest. Nok will discover the secrets of his planet, meet the "sky people" and will become the hero who will save his tribe.
Avatar is an action adventure game that lets the player explore the world of Pandora in a top-down perspective. The game contains unlockable information about the Avatar universe accessible through a Pandorapedia. Gameplay primarily consists of puzzles and real time combat involving Nok's different attacks. The game is addressed to a young public.
‹
›
Home
View web version