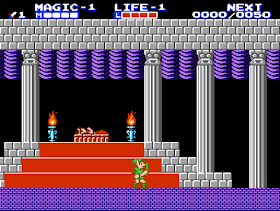 Genre: Role-Playing (RPG)
Perspective: Side view, Top-down
Visual: 2D scrolling
Gameplay: Action RPG, Metroidvania, Puzzle elements
Interface: Direct control
Setting: Fantasy
Published by: Nintendo of America Inc.
Developed by: Nintendo Co.
Released: 1988
Platform: Nintendo (NES)
The Adventure of Link is a direct continuation of the 1986 The Legend of Zelda game, although it differs noticeably from its technical design. Despite the fact that now the game has a reputation among fans as a kind of deviation from the ideas and traditions of the series, at one time the game was quite successful and introduced elements into the series that took root and later became part of the recognizable style of the entire series.

The protagonist of the game is again a young man named Link. After the victory over Ganon, Link helped restore order in the kingdom of Khairul for several years. Once he noticed a strange mark in the form of three triangles on the back of his hand. Meeting with an old woman named Impa, the former nurse of Zelda (having rescued which from trouble, he was involved in adventures last time), Link showed her a sign on his hand. Impa escorted him to the North Castle, the gates of which were magically "sealed for centuries". From the touch of the mark on Link’s hand to the door, the magic dissipated and Link’s gaze appeared to the sleeping maiden. She turned out to be Zelda, Princess of Hyrule. Impa said that after the death of King Hyrule, Zelda’s father, her brother demanded that she reveal the secret location of the ancient treasure in the form of three golden triangles, known as Triforce of Courage in assembled condition and part of another ancient artifact known as Triforce and able to fulfill the will of the owner. Zelda refused, and the prince's friend, the sorcerer, tried to enchant her in anger. As a result of the spell, the sorcerer himself died, and Princess Zelda fell into a deep, endless dream. The prince, unable to dispel witchcraft, placed her in the castle tower in the hope that someday she would wake up. The prince also issued a decree according to which from now on all the girls born in the royal family will be called Zelda in memory of the tragedy.
The sign on Link’s hand, according to Impa, means that he was elected to become the hero who would wake Princess Zelda. To do this, he will need to find the third fragment of Triforce, Triforce of Courage, hidden from the forces of evil in the Great Palace. The impa hands Link six precious stones and ancient letters indicating in which Hyrule's castles these stones should be placed. This ritual will open the entrance to the Grand Palace and awaken the servants of Ganon, who will kill Link for the return of their master. In the Grand Palace, Link will find an ancient sage who agrees to give him Triforce, having tested his courage: Link will have to fight his doppelganger (known as the Shadow of Link). After defeating the Shadow, Link finally receives the Triforce of Courage, returns to the tomb of Zelda, the three golden Trophors are combined into one Triforce, with which he will wake Princess Zelda from a magical dream.

The gameplay and appearance of Zelda II: The Adventure of Link has undergone a number of significant changes, not all of which were accepted favorably by the players.
The main innovation was the use of the traditional two-level system for moving around the game world for JRPG. A "world map" was introduced, using, like the previous game, a "top-side" view, but with a reduced scale, with a schematic designation of locations (villages, castles, dungeons). And a separate engine for moving inside locations (using the type of arcade platformer with side scrolling). The size of the game world available for research has significantly increased, and the number of non-game characters inhabiting the world has also increased significantly.
The Adventure of Link, remaining an arcade with quest elements, now included several RPG elements. So, for killing monsters, Link gets a certain number of points, not directly called experience, but when a certain number of points is gained, a transition to the next level occurs, accompanied by an increase in some character parameters (for example, health).
Among the innovations, one can also note the possibility of limited use of magic (in the previous game, Link could use magic only by finding a magic wand), the need to purposefully pick up bonuses knocked out of the opponent (previously, to raise a bonus from the ground, it was enough to walk on it, or reach it with sword or boomerang), a simplified form of communication with the NPC (now the player could, when in contact with a non-player character, press a button and get advice, a hint or a comment).
In addition, there were a number of changes that were identified by the players as controversial and caused a rather negative reaction. Only one type of weapon is available in the game - the sword (in the previous game there were several types of auxiliary weapons: two types of boomerangs that paralyze the enemy, and two types of arrows that could fire from a bow, as well as bombs). The number of life points was displayed in red squares instead of traditional (and considered by some players as more atmospheric) hearts. Killed enemies could leave two types of bonus - jugs that restore the supply of magic (blue jugs restored one division, red ones - the whole stock) and the so-called P-bags, which added experience points to Link. The player could now restore Link's health level only using magic, as well as resorting to the help of fairies (which were much less common than in the previous game).
‹
›
Home
View web version