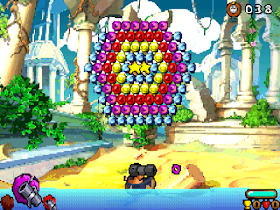 Genre: Action, Puzzle
Perspective: Side view
Visual: Fixed / flip-screen
Gameplay: Tile matching puzzle
Published by: Ubi Soft, Feral Interactive
Developed by: Team17
Released: 2005
Platform: Game Boy Advance (GBA)
This is the first and only game in the Worms series in which opponents act simultaneously. The gameplay is similar to Puzzle Bobble and Bust-A-Move, but with a few key differences. A hexagonal grid of colored blocks is drawn at the top of the screen, while the protagonist sits on a boat floating in the water under the blocks. Unlike Puzzle Bobble, the player is able to move the boat left and right. There are only two opponents and they are separated by a wooden partition, in which a hole periodically opens at different heights. There are many types of weapons in this game, however, the only weapon a player can start with is bazooka. Weapons are fired in the same way as in all Worms games: the player selects the desired direction of the bazooka, then, holding the fire button, selects the launch force and when the fire button is released, the projectile will launch. In this way, it is possible to shoot from a bazooka (and from some other types of weapons, such as a grenade and dynamite).
Shooting blocks leads to one of two outcomes. If a shell hits a block of the corresponding color, then this block (and all the same-colored blocks near it) will be destroyed, and blocks of other colors will fall into the water, and if the player is under them, then damage will be inflicted. If the projectile falls into a block that does not correspond to its color, then all the blocks within a certain radius will change their color to the color of the shell. A miss will also have two outcomes. If the projectile falls into the water, then its level rises. If the projectile flies off the screen, then a diverse heavy load falls on the player, causing damage.
The game has several modes: "Puzzle", "Tournament" and "VS". In the first mode, the player must undergo training and perform various tasks with blocks. In the "Tournament" mode, you can select ten different mini-games, and the player needs to achieve the best result in them, after which the earned points are recorded in the tournament table. In the "VS" mode, a single game against a computer is possible, as well as a multiplayer game for two players. There are three options for the game: battle to the death, collecting stars and the test of the tide. In the first case, the arena is divided into two parts by a partition, which sometimes opens. Each player has his own blocks, boxes and so on. If you shoot at enemy blocks through an open partition, they turn into dead. The one who survived wins. There are similar rules in collecting stars, but players are required to collect five stars; the one who collected them first wins. In a tidal test, unlike previous versions of the game, the partition is always closed. Both players are constantly raising water levels, which can be reduced by collecting stars. A player who lasts longer wins.
‹
›
Home
View web version