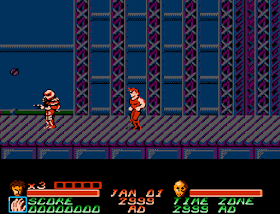 Genre: Action
Perspective: Side view
Visual: 2D scrolling
Gameplay: Platform
Setting: Sci-fi / futuristic
Published by: Milton Bradley Ltd.
Developed by: Rare Limited
Released: 1990
Platform: Nintendo (NES)
2999, the Earth is under siege - from all sides come aliens from the planet Drakkon. Using technology of movement in time, the enemy sent an army in four historical (for man) periods with the intention of changing the course of history in order to make it easier to win. As usual, you are given an almost impossible mission to save humanity. You can also travel in time, but, no matter how strange it sounds, you only have a little left - you need to catch up to 1.01.3000, or the self-destruction of a time machine will happen ...
And these same four stages are interesting by choice: medieval England in 1250, the West of the USA in 1860, the Caribbean in 1650 and France in 1943. But let's not argue with the developers about the importance of the times. To go to the next level, you need to find five golden balls that you can control the time machine. In total, you have 24 minutes and 34 seconds to complete, otherwise the game will end. By the way, weapons are quite diverse (according to the levels) - swords, throwing knives, grenades, laser weapons.
‹
›
Home
View web version