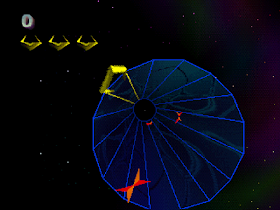 The proposed trick gives you access to the Tempest 2000 and Tempest Plus games. Finish the game in first place with a good score and enter HVS (H_V_S) as your name. On the next Entry screen, enter the YIFF! Take a look now at the main menu. At your disposal - new game modes! Make sure you can save them to an additional memory card. Then they will always be at your service.

Play until you reach the top line in the High Score table. To get there, you need to score 500,000 points! Now, in addition to the usual three-letter initials, you need to enter a five-letter one. Enter H_V_S and your letters in the empty spaces. Save the game to the memory card. Now you have access to two new game modes: "Tempest Plus" and "Tempest 2000".
To activate the following codes, at any time in the game, press and hold L1 + R1 + Up + Left + Triangle + Circle + Start + Select. If everything is done correctly, you will hear a loud screeching sound: the master code is entered. After that, you can enter the following codes during the game.

Now at any time, when you want to slip through the level, press L1 + L2 + R1 + R2. You will jump to the next level, as if no one is getting under your feet. However, the easiest way to do this trick is at the very beginning of the level, before the enemies appear.

Hold R1 and press L1, then burn the Superzapper. You will advance to the next stage immediately.

Hold L2 + R1 + Triangle + X and press Up. See the fancy streaks of light on the screen. Now there is the opportunity to exercise the brain in the next game.

Hold L2 + R1 + Triangle + X and press Right. The music will change, MOD Music will sound when you are in the next stage.

Hold L2 + R1 + Triangle + X and press Down. Hear "Attack!" Now go through the current stage without losing lives and not using the skip level trick. The first Power-Up gives you A.I. Droid

Hold L2 + R1 + Triangle + X and press Left. The music will change, Remix Music will sound when you are in the next stage.

On the Three-Character High Score screen, enter “GAY” as your initials. In the background of the “High Score” screen, the color changes and a pink rotating triangle appears.
‹
›
Home
View web version