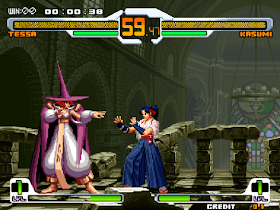 Genre: Action
Perspective: Side view
Visual: 2D scrolling
Gameplay: Arcade, Fighting
Interface: Direct control
Narrative: Martial arts
Published by: SNK Playmore Corporation
Developed by: SNK Playmore Corporation
Released: 2003
Platform: Neo-Geo
Pretty strong project in the genre of fighting. Here the best fighters from games from SNK and Capcom gather. In total, there are twenty-four characters (twelve from each company). Each is distinguished by its own style of struggle, experience and charisma. The initial splash screen of the game amazes with its beautiful graphics. Apparently the developers have worked on it a lot. The game has a plot, which is not characteristic of fighting games. All fights take place at qualitatively traced dynamic stages. Each fighter has a large number of different tricks, among which there are special attacks. All characters are given a lot of attention. This had a positive effect on their depiction (for example, many fighters wriggle their clothes during the battle). Opponents are pretty hard to handle. If the battle ended in failure, then you can choose a lighter mode. Then surely the victory will remain with you.
‹
›
Home
View web version