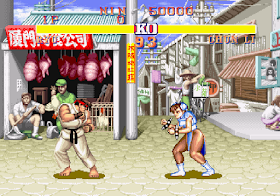 Genre: Action, Compilation
Gameplay: Fighting
Published by: Capcom Entertainment
Developed by: Capcom Co.
Released: 1998
Platform: PlayStation (PSX, PS1)
Street Fighter Collection 2 is the second title in the Collection series and it goes even further back to the classic days of Street Fighter II.
Included is the one that started it all, Street Fighter II: The World Warrior, and the two improved editions, Champion Edition and Hyper Fighting, known as Dash and Dash Turbo in Japan respectively.
Street Fighter II: The World Warrior features all the basic features that would be carried over to subsequent Street Fighter II editions. The original game features eight selectable characters, with Ryu and Ken being the only characters with identical moves. In the single-player tournament, the player faces the other seven main characters, before proceeding to the final four opponents, which are non-selectable boss characters. Matches can go up to ten rounds if there is no clear winner before making the player lose by default (in Champion Edition and onward, this is reduced to four rounds).
The most significant change to Street Fighter II: Champion Edition is the ability to play as the four boss characters, as well as allowing two players to select the same fighter, with one character being distinguished from the other with an alternate color scheme. Characters using their alternate color scheme have their names printed in blue below their lifebar. The number of opponents in the single-player mode is increased to twelve due to the addition of clone matches. Some of the artwork is redrawn as well and the stages' backgrounds are recolored. Much of the gameplay is revised to balance the characters out.
Finally, Street Fighter II: Hyper Fighting is a minor update released in response to the proliferation of modified bootlegs of Champion Edition. Released on December 1992 (eight months after Champion Edition), Hyper Fighting increases the game speed and adds new special techniques for some of the fighters such as Dhalsim's Yoga Teleport and Chun-Li's Kikoken. All of the characters receive new color schemes, with the new scheme becoming the default and the original color scheme as the alternate for all characters except M. Bison, who still uses his original color scheme as the default and the new scheme as the alternate.
‹
›
Home
View web version