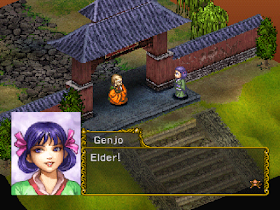 Genre: Role-Playing (RPG), Strategy / tactics
Perspective: Isometric
Art: Anime / manga
Pacing: Turn-based
Setting: Fantasy
Published by: KOEI Corporation
Developed by: Fu-Qi
Released: 2001
Platform: PlayStation (PSX, PS1)
The game is based on an ancient Chinese legend, which is described in some detail in the famous novel called "Journey to the West" or "King of the Apes." By the way, many episodes from this novel were included in the famous Dragon Ball series. Saiyuki is a story about the story of a young man named Sanzo, who was hired by Lady Kannon, and he must deliver the mysterious equipment not to anywhere, but to India. Along the way, he must seek out and "collect" the Guardians, whom he discovers in a wide variety of territories. In addition, he meets friends who help him, as a result of which a rather large team is formed, but only six can be used in battle at any particular moment. Each of Sanzo's friends has the ability to turn into a powerful creature of a certain type. They are called Were, and again, in each particular battle, only one of Sanzo's friends can turn into this monster, but at the same time collective Werepoints are spent, and Sanzo, oddly enough, cannot turn into a monster, but has phenomenal magical power and the ability to summon to help at the right time the guardians whom he will meet along the way. By genre, this is a tactical role-playing game such as Vandal Hearts, etc. It would be wrong to compare it with Final Fantasy Tactics, since this is by far the best game of this type, but if you are a fan of role-playing games, then Journey to the West will certainly give you great pleasure.
‹
›
Home
View web version