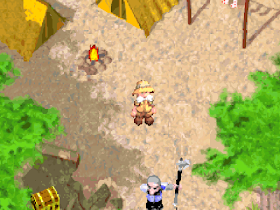 Genre: Action
Perspective: Side view
Visual: 2D scrolling
Pacing: Real-time
Gameplay: Platform, Puzzle elements
Interface: Direct control
Setting: Fantasy
Published by: THQ Inc.
Developed by: Rare Limited
Released: 2004
Platform: Game Boy Advance (GBA)
Pursued by a saber-toothed wolf, an elderly archaeologist and just a rescuer of people in distress, will use the objects found on the map to go to the cave itself with a blue guard and steal a valuable artifact from under its paws and fangs. Starting the game on the global world map, you will be sent to various tasks, the purpose of which will be to capture fossils, and run from the wolf, who will race after you to the very beginning of the level in order to regain what has been lost. Excellent graphics, excitement and stylization make it recommended for all players, regardless of age.
‹
›
Home
View web version