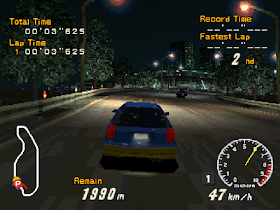 Genre: Racing / driving, Role-Playing (RPG)
Perspective: 3rd-person
Published by: Sony Computer Entertainment Inc.
Developed by: Square Co.
Released: 1999
Platform: PlayStation (PSX, PS1)
The events of Racing Lagoon take place in Yokohama and describe the fate of a new member of the street racing team who lost his memory and throughout the passage tries to recall the circumstances of the mysterious race that happened ten years ago.

The gameplay is built on the competition of drivers of racing cars taking place on the streets of the night city. The player has the ability to customize the car under control, choose a body color, change spare parts, and details for modernization can be taken from cars won in races. Before the start of the gameplay, it is proposed to choose one of two modes: role-playing, where the pilot, performing various missions, competes with other racers, and the usual one, where you just need to take part in a series of consecutive races.
‹
›
Home
View web version