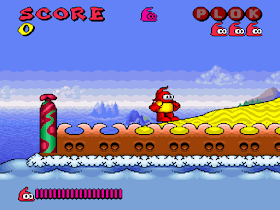 Genre: Action
Perspective: Side view
Visual: 2D scrolling
Gameplay: Arcade, Platform
Published by: Tradewest
Developed by: Software Creations Ltd.
Released: 1993
Platform: Super Nintendo (SNES)
It's about a game where the hero lives in a very addictive world and knows how to rush into enemies with his limbs, while not being Rayman. A game that never became popular, despite its fairly adequate performance. The game, the soundtrack for which was written not by anyone there, but by the Follin brothers themselves, who became famous thanks to the epic soundtrack to the c64 version of the game Ghouls'n'Ghosts. Plok is the name of this game and the name of its main character.
So what is it? Plok is a platformer that was released on SNES in 1993 and tells of the adventures of a strange-looking protagonist, reminiscent of something between the Ku Klux Klan and the medieval executioner, who inadvertently washed their outfits along with colored clothes. He will have to go first on one journey with the goal of returning the heirloom, then on yet another - to tear out his native house from the clutches of enemies. Gameplay - Hardcore Hardcore! Here only NES Battletoads can be set as an example. It all starts quite harmlessly (not counting constantly falling logs in front of the nose itself, which sometimes is simply impossible to dodge, without knowing about them in advance), but closer to half the game begins hell, which finally achieves a practically absent continuation system (those that are notorious continue ) - they are given once in several levels, and, damn it, who invented to make them so shy? They not only act only once and return to the level where they were received, but also reset after defeating the boss. The game is already rather big ... I’m surprised if anybody passed it at one time. The second surprising moment - temporary invulnerability after the received damage is present not only in the hero, but also in all enemies who do not die from one hit. WHY IS THIS? Especially when it comes to vile, small and very jumping fleas. They need three hits, but they can not be spammed with limbs, you have to wait after each hit until their invulnerability passes. No, there you can enable the so-called "children's mode", but it not only reduces the complexity of the game, but greatly reduces the number of stages necessary for passing. Legacy Island will especially get it in the children's mode from the flashback of the protagonist, who will be cut out of the game under the root.
The main character is a master at throwing his own limbs into enemies, and this is what he lives for. He can be pulled by them at least simultaneously, but if Plok is left without legs, then he will have to run and jump with his own efforts, excuse me, asses, and this, to put it mildly, is not very convenient, the limbs will not immediately fly back. The gameplay is diluted with various, but rarely encountered, turn-ups that temporarily give the main character either weapons such as a shotgun or flamethrower (which, by the way, ignore the enemy’s temporary invulnerability and literally trample them into the mud), or, at the end of the game, some some technique up to the tank and the flying saucer. And after receiving the magic amulet, the hero will learn to turn on the berserk mode and kill any evil with a normal jump, which saves a lot of time.
And what about the plot? Even if it’s a platformer, it must be at least some there! The action takes place on a group of islands in the Polyesta archipelago (and, it would seem, synthetic fabric here ...), and the story begins with the fact that some vandals pi ... steal a family flag from the roof of the main character’s house. The most indignant Plok will set off in search of him that will lead him to the western island. Returning home with the flag, the protagonist sees that the fleas are flooded, taking advantage of the moment when the hero was away. And now the red-yellow thrower of limbs has to kick out all the unnecessary living creatures from its island and restore justice!
This is the scenario. Original, yes? .. Numerous levels will be diluted with comments of the protagonist of varying degrees of fun, and a couple of times there will be even the most real rudiments of dialogues. There is no sense in them, of course, but that way the game at least does not drown in absolutely indecent monotony.
This world, amazing in its abnormality, is drawn quite well. Detailing the levels suffers a little, especially the very first ones, but the beautiful backgrounds save the situation. Yes, and changing the time of day plays into the hands. It would be more than just any little things pleasant to the eye at the stages ...
The game soundtrack is much more fun. The brilliant work of the Follin brothers, in which they definitely gave all out one hundred percent and even a little more. Even the already opening composition does not just hint, but screams loudly that the soundtrack will be very vivid and memorable. And if at first one single song on the entire western island called "Cotton Island" may not make the proper impression, but when the track "Akrillic" comes into play, an accidental player may experience an involuntary eargasm. In some places, it's just some progressive rock that sounds far beyond the ordinary soundtracks for SNES. Apparently, we were able to afford quality samples. Flea Pit from the second half of the game is somehow even gloomy for such a game, and the transition to melody in the first minute makes associations with Pink Floyd ... Well, how not to mention the Cavern track, which perfectly creates the feeling of an easy, but sincere fairy tale?
‹
›
Home
View web version