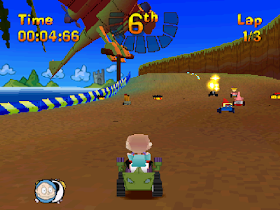 Genre: Racing / driving
Perspective: Behind view
Gameplay: Arcade, Vehicle simulator
Vehicular: Automobile, Track racing
Published by: Infogrames, Hasbro Interactive Ltd.
Developed by: Software Creations Ltd.
Released: 2001
Platforms: PlayStation (PSX, PS1), Game Boy Advance (GBA)
As often happens on platforms, sooner or later the heroes of our games (regardless of genre) get rights and get behind the wheel of some exotic means of transportation, usually it's something like karting. So the heroes of cartoons and games from Nickelodeon decided to find out which of them is cooler, but faster, among them - Angelica, SpongeBob, Kotopёs and others *. Twelve tracks, twelve racers, many bonuses and game modes. Nicktoons Racing A game in the genre of Go-Kart Racing with cartoon characters from Nickelodeon. This game is not very different from what we saw earlier in similar games, for example in Crash Team Racing, - the player controls the selected character with a vehicle unique to him and strives to reach the finish line by all means first. In this he will be helped not only by driving skills or speed, but also bonuses everywhere scattered on the road, whether it be nitro (shiny balls on the road), or something that will delay opponents (gifts on the road) - coconuts to throw them at rivals, flashes ( for temporary blindness), traps in the form of garbage cans, baby powder or green mucus ...
The game has four modes for one player. The main mode is the Championship Cup, where you must be at least in third place to continue participating in the race. Time Trial mode - you are competing with a ghost machine to set a time record on any of the available tracks. The Race For Fun mode is for practice, where you can choose any of the open tracks and racers and ride for your own pleasure (aimed at winning of course). And the last mode - Replay Mode will allow you to change the rider after each race, without returning to the main menu, and continue the race. Not forgotten and the multiplayer mode. There are three of them. The first is similar to the Replay Mode for a single player, but in split-screen mode. The other two are a total race of 2 players from all honest companies, or only two players compete.

Characters participating in the race