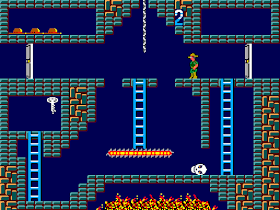 Genre: Action
Perspective: Side view
Visual: 2D scrolling, Fixed / flip-screen
Gameplay: Arcade, Metroidvania, Platform
Published by: Parker Brothers
Developed by: Parker Brothers
Released: 1989
Platform: SEGA Master System
Oh, here is the classic! I did not expect to see this very game on the Master System! This is the most realistic version of all that I have seen before. A brave traveler and adventurer, Panama Joe (Indiana Jones is relaxing) explores the pyramids of the ancient Aztecs. 11 levels, about 100 rooms in which you need to collect everything that can be taken away. However, there are many dangers in this tomb! The Emperor of Montezuma just does not give up!
Parker Brothers redid the classics so that it is impossible to recognize! If the levels are a little simplified, but still recognizable, then the graphics are qualitatively improved and animated. Check it out for yourself. The sound remains the same.
‹
›
Home
View web version