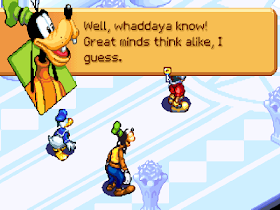 Genre: Action, Role-Playing (RPG)
Visual: Isometric
Gameplay: Platform
Setting: Fantasy
Published by: Disney Interactive
Developed by: Jupiter Corp., Square Enix Co.
Released: 2004
Platform: Game Boy Advance (GBA)
Gameplay Kingdom Hearts: Chain of Memories is a kind of mixture of role-playing and card games. As in many other RPGs, defeating enemies, the player earns experience. Upon accumulating a certain amount of experience, the main character gets a level, and the player can increase either the number of health points, the number of CP (Card Points), or learn a new technique. The role-playing system of the game is based on cards. Cards are used both during the battle and outside it. Battles take place on a separate battlefield. Outside of battle, the player travels through isometrically displayed locations. Enemies walk on the map, and if the player comes into contact with them, the battle begins.
The peculiarity of the game is the so-called "room synthesis". When moving between locations, certain types of room cards (Map Cards) are required. Depending on what type of cards was used, this will be the next location. There are several types of room cards: red ones determine the number and behavior of enemies, green cards strengthen the main character while he is in the room, blue cards remove enemies from the room, but add bonuses (save point, store, etc.).
There are three modes in the game: campaign for Sora, campaign for Rika and multiplayer game. Initially, only the campaign for Sora is available; if it is passed, the "Reverse / Rebirth" mode opens, allowing the player to play for Riku and use multiplayer.

Battles take place in real time. The combat system itself is based on a map system. The player can move around the battlefield, jump and dodge attacks, but to attack, use magic, an item or summon a partner, you need to use the cards that are available for selection in a special menu. All cards have a number - from zero to nine. Enemies also use cards. The player cannot use the card while the enemy is doing this, and vice versa. You can interrupt the use of a card by an enemy with your card if its number is greater than or equal to the card number of the opponent. A card with a value of 0 interrupts any attacks, but it can also be beaten with any card. You can add cards in combination (up to three at a time) and use combo attacks that are harder to interrupt - their value will be equal to the sum of the values ​​of all cards included in the combination. Usually combinable cards are used one after another, but sometimes you can create a “special technique” (Sleight) - instead of using several cards in a row, the player uses a certain ability, however, however, the first card in such a combination becomes inaccessible until the end of the battle. All applied cards disappear from the deck, but they can be returned by “shuffling” the Reload deck. Enemy Cards can also be used - as a rule, they cannot be interrupted; they strengthen the player or weaken his opponents. You can run away from almost any battle (with the exception of the battles stipulated by the plot) - for this it is enough to run to the border of the battlefield for a few seconds.
The gameplay of the Sora and Riku campaigns is different. Sora can make her own deck of cards for battle, receiving them as a trophy after battles or buying them in mugle shops in certain rooms. Riku cannot create his own deck of cards - at different stages of the game they will be different, and they cannot be changed. Unlike Sora, Riku has only physical attack cards, enemy cards, and Mickey Mouse companion summon cards.
‹
›
Home
View web version