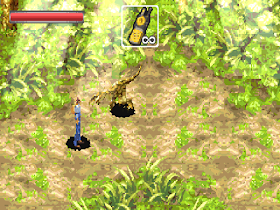 Genre: Action
Perspective: Side view
Gameplay: Platform
Published by: Konami Corporation
Developed by: Mobile21 Co.
Released: 2001
Platform: Game Boy Advance (GBA)
After crash landing on Isla Sorna, guard Dr. Alan Grant gets in touch with the coast and tells to be saved to reach the coast of the island. Play as Grant, the player's goal is to travel through eight areas of Isla Sorna to reach the coast.
There are two types of levels: Freeroam and just forward. Each level uses Freeroam, with the exception of three. These three levels also use cross-section camera angles, while the rest of the levels use an overview camera.
‹
›
Home
View web version