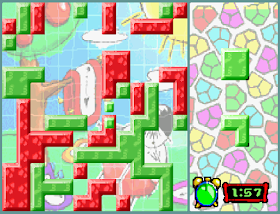 Genre: Puzzle
Perspective: Top-down
Published by: THQ Inc.
Developed by: Rare Limited
Released: 2004
Platform: Game Boy Advance (GBA)
The original game idea, which with its magnificent, colorful implementation will not leave players and lovers of the logical industry aside from the matter. There are three game modes to choose from: Puzzle (you need to insert blanks, usually in the center of the figure, or contiguous figures; to completely erase the contiguous figures on the screen, usually use the missing elements (gaps), but the number of issued blanks is limited), the Destroyer (use the issued blanks which are erased when certain forms are created, but need to be completed in two minutes), Marathon (you need to connect the figures so that they form a perfect rectangular shape design to erase them, as well as replenish your score with glasses, but you need to be careful about the purple snake moving at you, which devours, gradually the screen for five minutes). The graphic execution of the game menu is made at the highest level, each of the icons is beautifully animated, which gives pleasure when choosing the desired mode.
‹
›
Home
View web version