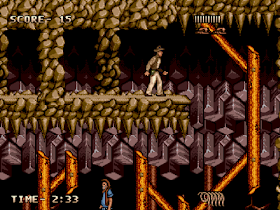 Genre: Action
Perspective: Side view
Visual: 2D scrolling
Gameplay: Platform
Setting: Interwar
Published by: U.S. Gold Ltd.
Developed by: Tiertex Ltd.
Released: 1992
Platforms: SEGA Genesis / Mega Drive, SEGA Master System
A good version of the adventures of a famous restless archaeologist. He is armed with a whip (what else), and also pounds enemies with fists. The graphics and music in the game are at a good level, and the gameplay is interesting throughout the game. Single player with two difficulty levels.

Level select - As soon as the Lucasfilm Games logo appears, you can start typing the code. The code consists of the following combination of keys A, B, C, B, C, A, C, A (sometimes you need to press A or B). As soon as the code is entered, you will be taken to the screen with a choice of level, “SHHHHHHH” will still be written on it.
This password can also be entered on the title screen.
‹
›
Home
View web version