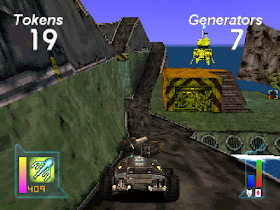 Genre: Action, Racing / driving
Perspective: 3rd-person
Gameplay: Shooter
Setting: Sci-fi / futuristic
Published by: Take-Two Interactive Software
Developed by: Tempest Software Ltd
Released: 2000
Platform: PlayStation (PSX, PS1)
The action of the game Grudge Warriors takes place in the dark future, when anarchy and ubiquitous disassembly of bandit groups reigns everywhere. Crimelord - the authority of the criminal world organizes a tournament on a secluded island called "Death Ring" where 11 gangs will find out which one is cooler. The game is made in the genre of Vehicle Combat, a kind of Twisted Metal, where the player has at his disposal eleven special armored vehicles with five weapons on board, four of which are common to all, and the fifth is unique to a particular car. Each of their cars represents a certain gang. In single player, your goal is to destroy all tanks, firing points, cars and generators. To destroy some generators, you have to work your head to find the switches that turn off the force field. Destruction of generators is a key task (there are eight of them at each level), destroying them, the player reduces the combat effectiveness of enemy armored vehicles. During the game, you should collect tokens and in general everything that is scattered on the battlefield to upgrade your death machine.
‹
›
Home
View web version