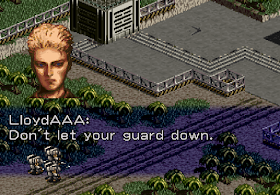 Genre: Role-Playing (RPG), Strategy / tactics
Perspective: 1st-person, Bird's-eye view
Visual: Isometric
Pacing: Turn-based
Vehicular: Mecha / giant robot
Setting: Sci-fi / futuristic
Published by: Square Co.
Developed by: G-Craft
Released: 1995
Platform: Super Nintendo (SNES)
The entire game process can be conditionally divided into three basic actions, by performing which the player moves forward: observing character dialogs, completing missions, improving and setting up wanzers (huge metal robots) for use in the next task. The player travels from one point to another on the map, and the further he goes deeper into the plot, the more new locations appear on the map. Villages and cities have an intermediate value between combat missions, where you can equip your fighters on a campaign, earn money, save, etc.
Almost all the battles in the game are conducted on wanzers, each of which has a body, legs and two arms. Each part is endowed with certain functions and is characterized by a unique number of health points (HP). Legs, for example, are responsible for movement and evasion, hands for accuracy and equipped weapons, and the body for the overall lifting power of the machine. As soon as the body’s life points are equal to zero, the entire wanzer instantly dies, so in fact the main goal of the game is to destroy the bodies of enemy combat units.
All weapons in the game are divided into three categories: melee, medium-range and long-range. All kinds of batons belong to hand-to-hand combat, which deal only one blow, but, nevertheless, have a high damaging ability. Medium-range weapons include machine guns, shotguns, flamethrowers, and shotguns. Machine guns are fully automatic, that is, they inflict a lot of minor damage on the target. In turn, shotguns, flamethrowers and shotguns have a semi-automatic structure, they fire fewer shots, but also in random parts. Long-range weapons are presented by all kinds of bazookas and rocket launchers, and are intended for long-range combat. Unlike the two previous types of weapons, it has limited ammunition, and requires periodic reloading after several salvos.
An important aspect of the gameplay is the construction of wanzers from various components, the weight of each part is of great importance, as well as the permissible motor power, which shows how many tons of weight this or that machine can carry. In addition to weapons, various accessories can be installed on metal giants, such as improving the characteristics of an on-board computer, increasing the power of a jetpack or, for example, an all-metal armored shield.
In between regular missions, you have the opportunity to participate in gladiatorial fights, constantly taking place in the arenas of all major cities. The battles arranged there are held face to face, where the player can test his strength before the upcoming difficult task, and also earn some cash for the conversion of his garage park.
‹
›
Home
View web version