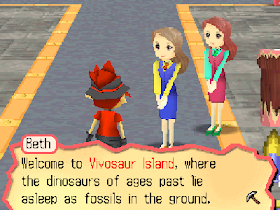 Genre: Role-Playing (RPG)
Perspective: 3rd-person
Visual: Isometric
Published by: Nintendo Co.
Developed by: Artdink Corporation
Released: 2009
Platform: Nintendo DS (NDS)
Fossil Fighters starts with an upcoming Fossil Fighter arriving on Vivosaur Island, a goldmine of dinosaur fossils. The fossils are encased in stone, that can be taken to a lab so the player can use the touch screen to hammer, chip, drill and brush away the bits of rock around the fossil. The player must be careful not to damage the fossils, or they will be destroyed. Once successfully cleaned, the dinosaur can be revived into powerful dinosaur-like creatures called "Vivosaurs" whose attributes will vary depending on how well they handle the fossils during the cleaning process. The more carefully and completely a player cleans a fossil, the more powerful the Vivosaur will be in battle.
The game revolves around hunting for fossils, reviving over 100 Vivosaurs, and using them to battle other Fossil Fighters in turn based Vivosaurs battles that can contain up to three Vivosaurs per side. The better the player goes the better their rank, the higher the rank the more areas the player will be granted access to so they can dig up better fossils, and learn more about the mysteries of Vivosaur Island.
‹
›
Home
View web version