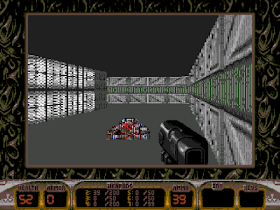 Genre: Action, FPS
Perspective: 1st-person
Gameplay: Shooter
Interface: Direct control
Narrative: Adult, Comedy
Published by: Tec Toy Indústria de Brinquedos S.A.
Developed by: 3D Realms Entertainment
Released: 1998
Platform: SEGA Genesis / Mega Drive
The hero of the next game is not required. The whole gaming fraternity is familiar with him, or at least heard of his existence. A big fan of women and big pistols, powerful cars and the owner of a healthy sense of humor. Defender of humanity from aliens and the main "swineherd". After such a detailed description, it is difficult not to recognize the universal favorite - Duke Nukem.
The appearance of this blonde on the console is already a lesser surprise than the game discussed above, but still. In fact, the reason why the great pirates decided to reveal the Duke people in a conditional 3D performance is not completely understood. After all, there are games in which he is also the main character, but the resources are "eaten up" much less. For those who have been playing computer games not so long ago, I can report that Duke Nukem did not immediately become the hero of 3D militants, but was known much earlier, back in the era of 2D shooters. He ran through space stations, where he destroyed countless hordes of extraterrestrial flora and fauna. As I recall, the game could be perfectly played on the doubles (286's), which once again proves its greatest adaptability to porting to 16-bit.
If the pirates had borne precisely this embodiment of Duke, they would have had to put them a modest monument, and the owners of the Genesis would have received an excellent, in all respects, action movie. But, unfortunately, the pirates took a completely different path, so to speak along the path of progress, and swung at 3D. But the 3D was frightened of this and ran away, which is why the pirates got a game similar to Zero Tolerance and Bloodshot, but an order of magnitude worse. Although there is good suspicion to believe that the game was not created by pirates at all, but for well-known reasons, this process has stalled.
During the transfer, as expected, the schedule suffered the most, and you can’t get anywhere. But God sees, it could be much worse. Unknown programmers still managed, at least in part, to convey the atmosphere that surrounds Duke. He continues to strew with his stabbing jokes and disperse the crowds of monsters on an unknown space station, shooting after them. And there’s plenty to shoot from. The entire deadly arsenal has survived, from the low-powered Beretta to the all-destructive rocketlauncher. And when the cartridges run out, you can kick the adversaries with a polished army boot. If you press a tricky combination of buttons, then you will see a view of the map, which will allow you to better navigate in the mazes. But that’s all the good, unfortunately, ends, and you can safely proceed to the funeral part, in which you have to slightly scold the game.
To begin with, during the game there is an acute shortage of first-aid kits and cartridges, and these two symptoms appear simultaneously. You don’t even know what to be lean about. But no matter how hard you try, in the end your health and cartridges end, and rushing after the monsters, pushing them with kicks, becomes completely impossible. Death is coming sooner. To fire from a long distance, when there is still the opportunity to dodge the fireball fired at you, is also impossible because of the inaccuracy of the sight. This is precisely the main drawback. It’s good that at least the strafe was left, without which it is impossible to live even a minute.
But in any case, Duke Nukem is an immortal classic of the genre that you want to “touch” in any performance. And even those small flaws that are found here, will not be able to overshadow communication with this terrific hero.