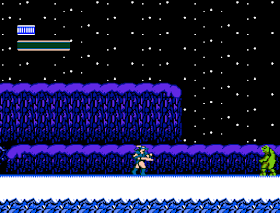 Genre: Action
Perspective: Side view
Gameplay: Platform, Shooter
Setting: Fantasy
Published by: SOFEL Corp.
Developed by: Natsume Co.
Released: 1992
Platform: Nintendo (NES)
A mix of platforming and scrolling shooter. In the beginning, we play as a guy armed with a sword. When killing enemies, the energy scale is replenished and, when enough is gained, you can turn into a dragon for a while. In addition, in the form of a man, a boy can "charge" the attack and put out a powerful charge. What it will be and what the dragon will shoot depends on the color of the boy. The color can be changed by selecting a special bonus letter. The graphics are nice. The levels, although few, are very diverse. There are 6 of them. If you can decide where to go and where to fly at the first five levels, then the last level is a pure scrolling shooter. It is impossible not to say about music - it is simply excellent! Good game.
‹
›
Home
View web version