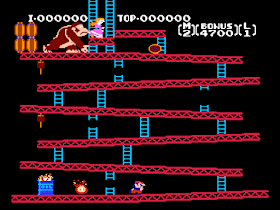 Genre: Action
Perspective: Side view
Visual: Fixed / flip-screen
Gameplay: Arcade, Platform
Interface: Direct control
Published by: Nintendo of America Inc.
Developed by: Nintendo Co.
Released: 1986
Platforms: Nintendo (NES), Game Boy, Arcade Machine
Jump, Jumpman, jump! Before us is the port of the cult arcade classic, in which the legendary character of the Nintendo company, the plumber Mario, first appeared. With some reservations, the original arcade "Donkey Kong" (1981) became the founder of the platformer genre (the Space Panic game was released a year earlier, which also claimed this title, but there was no way to jump in that game, so its claim to be the first look unfounded).
The protagonist of the game is Jumpman - a carpenter who must save his girlfriend from the villain, whose role is played by Donkey Kong. "Donkey Kong" was the first of the games that used the later-established "save the girl out of trouble" scenario.
Graphics in the port are quite standard for NES in those years. A simple image, a simple music, a simple gameplay. "Everything ingenious is simple."
‹
›
Home
View web version