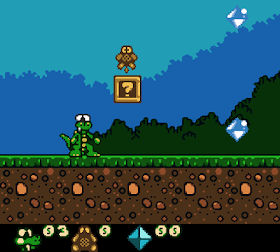 Genre: Action
Perspective: Side view
Visual: 2D scrolling
Gameplay: Platform
Published by: THQ Inc.
Developed by: Argonaut Games PLC, Virtucraft, Ltd.
Released: 2000
Platform: Game Boy Color (GBC)
Initially, the first game in the series was developed with the aim of offering it to Nintendo for the exclusive edition on Nintendo 64 as a 3D platform game about Yoshi - a sequel to Yoshi's Island. The Argonauts had reason to hope for agreement, as they had previously developed the original Star Fox for SNES for Nintendo. However, the application was rejected. The Argonauts found another Japanese publisher, but the characters had to be changed. The idea of a 3D game about Yoshi influenced the release of one of the main Nintendo games of that time - "Super Mario 64."
‹
›
Home
View web version