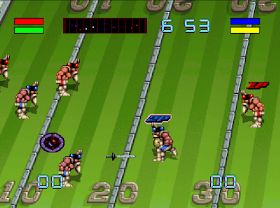 Genre: Sports
Sport: Football (American), Football (European) / Soccer, Rugby
Gameplay: Fighting
Setting: Sci-fi / futuristic
Published by: Telegames
Developed by: Teque London Ltd.
Released: 2005
Platform: Atari Jaguar
The game is an American football / rugby without rules, where one goal is to throw an oval ball into the opponents' goal. There are no breaks in the game in the game, the grass of the field deteriorates from falls and explosions, you can beat opponents (there are effects of blood spatter), bring them down in a jump, use weapons and bonuses. A recumbent opponent can be kicked. When killing an opponent, his head flies off, which you can throw and kick. You can also win if you kill all opponents.
‹
›
Home
View web version