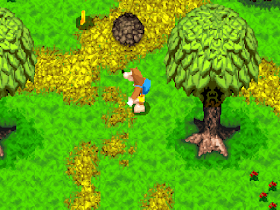 Genre: Action
Visual: Isometric
Gameplay: Platform, Puzzle elements
Published by: THQ Inc.
Developed by: Rare Limited
Released: 2003
Platform: Game Boy Advance (GBA)
Two months have passed since the witch of Gruntilda was defeated by Banjo and Kazooie. After falling from her tower, Gruntilda was buried underground. While the witch was waiting for her sisters to set her free, Banjo and Kazooie cleaned their house. At this time, Klungo is not able to move the boulder that buried the witch, decides to create a mechanical clone of Grutilda so that she can move to the disc and take revenge on the bear. Transferring to the Banjo's hut, she abducts Kazui and is transported twenty years ago to prevent the bear and his friend from meeting the bird. Mumbo-Jumbo uses magic, and brings the hero back in time to again disrupt the evil plans of Gruntilda. The world of Banjo is filled with many friendly NPC characters who give the bear clues, tell the latest news and ask them to complete tasks. Banjo Bear can attack opponents with a large hammer, swim above and under water, make a jump and do a roll (can be used as an attack). Participating in mini-games, the bear can get extra points: Tree - the hero descends through the insides of the trees, sliding in a circle, avoiding obstacles and collecting useful objects; Sheep - you must use a fishing rod to catch as many sheep as possible for a limited time and others ... Mumbo-Jumbo using his magical power can transform a bear into various animals for a limited time so that the bear can complete tasks. The main interest in the game will be numerous boss battles.
‹
›
Home
View web version