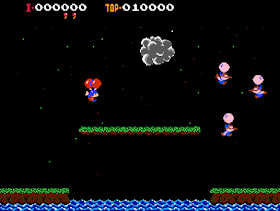 Genre: Action
Perspective: Side view
Visual: 2D scrolling
Gameplay: Arcade, Platform
Published by: Nintendo of America Inc.
Developed by: Nintendo Co.
Released: 1986
Platform: Nintendo (NES)
"Balloon Fight" is a fascinating mini-arcade game, the purpose of which is to burst the enemy’s balls and prevent them from bursting their own. The action takes place on a single screen with one or several platforms on which your opponents are sheltered, starting to inflate their balloons. Having inflated, they immediately begin to wave their hands energetically and rise into the air. You also take off after them, and - the carnage begins!
For a successful passage of the level, you just need to fly up to the enemy and simply touch his airborne vehicle (ball), after which the opponent lands in the best case (for him) on the ground, and in the worst - immediately in the water. Landing enemies need to be quickly pushed into the water before they have time to inflate another ball. Beware of sparkling lightning and clouds, they can significantly reduce the time you spend at a level.
It’s very interesting to play alone, but it’s still more fun to play “Balloon Fight” together, since in this mode you will need not only to hunt enemies, but also to deftly maneuver so as not to accidentally burst your friend’s ball! The game has another mode - “Balloon Trip”, where you need to collect as many balls as possible, without falling into the water and not touching insidious lightning.
The game had some success with the owners of the NES console, and it is logical that it was subsequently reissued to Game Boy Advance (this happened in 2002).
‹
›
Home
View web version